Symantec develops Norton Security Antivirus since the early ’90s, so it’s one of the most established security company in the industry, and that makes Norton one of the most famous antivirus of the world. Its reputation is well earned, for Norton Security Antivirus is really a solid product, although a premium one. But contrary to its free competitor, it offers many important features in its basic version, without forcing you to download some add-on to perform some simple task. 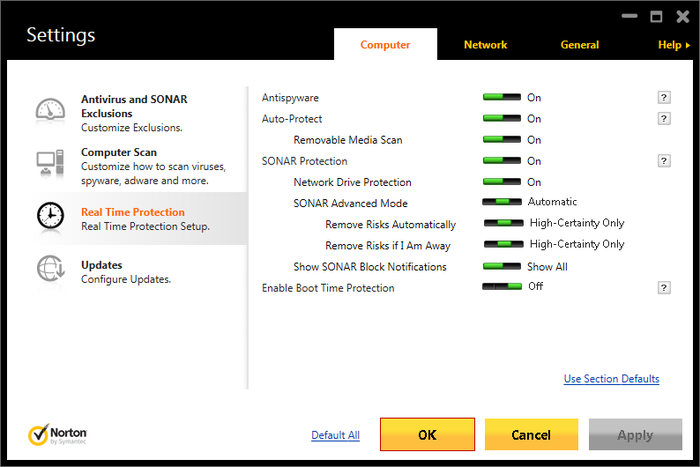 Norton Security Antivirus 2015 has a lot of features under the hood.

Norton Security Antivirus has a clean interface and smooth design that lets you understand exactly what’s happening on your PC. Its ability to find malware is excellent and what positively impressed us is some nice features that it include in a standard installation, and if you need to protect more than one device you can buy the more expensive versions.

One of them most interesting thing about Norton Security Antivirus is surely its bravery: if it doesn’t successfully remove some malware or virus from your computer while you’re paying its subscription, Symantec will fully refund you. It’s a strong message, and we like it very much.
Another neat feature is the substantial parity between PC and Mac version, which is not so widespread as an inclination.

Depending on your hardware, Norton Security Antivirus can be a heavy load on the CPU; but ironically it includes some tools to boost your PC’s performances, included CPU usage statistics in real-time. For an extra per year (or the premium subscription), Norton gives you 25Gb of storage for your backup, which is an excellent addition to the premium subscription, but too expensive for a single option.

Norton Security Antivirus is one of the best protection tool available, and even if you can find most of its features in free antivirus, its ease of use, its track records and its streamlined offer place it at the forefront of the industry.

Best for: family use, or personal with a lot of device.