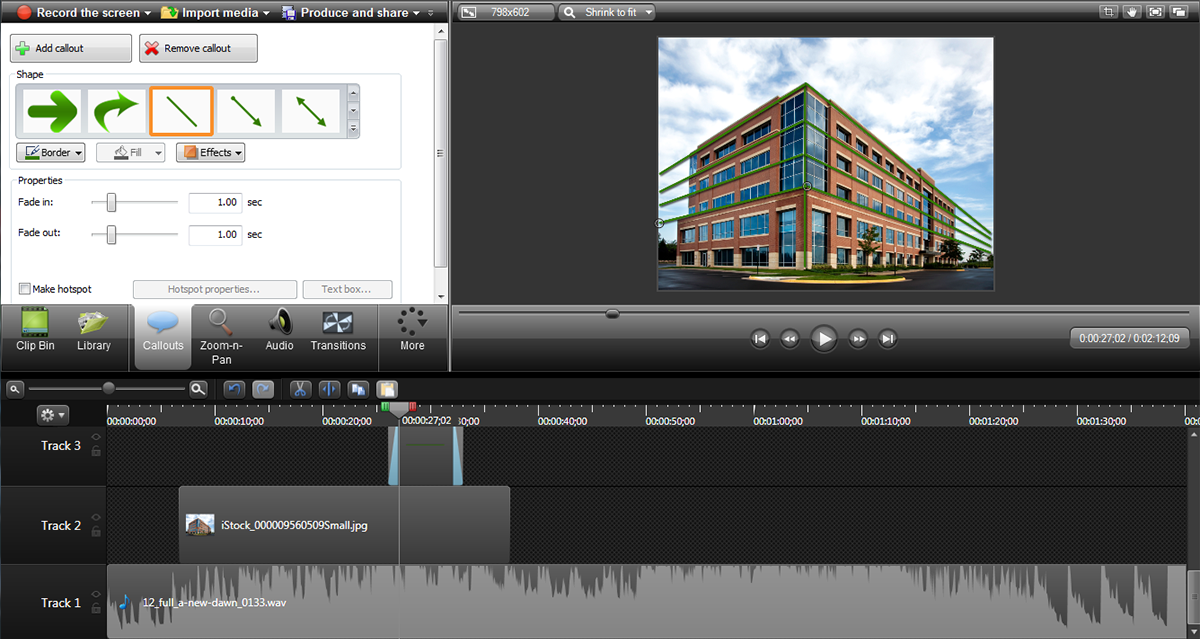 Known to be one of the best solution for screen recording, with Version 8 Camtasia becomes a fully-fledged video editing software, a competitor to most of the top-of-the-line software in the field.

With the former, you can record everything that happens on your screen, and actually is the reason why Camtasia is renown as a reliable software. Indeed, with Recorder is very easy to get a screencast in a few clicks.

On the other hand, Studio is the proper editing suite: its interface is pretty standard and follows the implicit rules of the professional video editing software, with the typical three panels view (bottom: timeline, upper left: library, upper right: preview).

Using Recorder you can define the screen area you want to capture, and if record also the surrounding audio (maybe you want to add it in post-production, as voice-over); you can also set up the recording to start after a fixed amount of time or at a precise time of the day, or associate the recording to another, specific software.

With Camtasia you can add to your video interactive elements: for example, a teacher can prepare a video quiz test for its students, gathering the result through the video itself.

Camtasia has all the features you’d come to expect from professional video editing software and they’re all high-quality features: transitions, callouts, audio effects, and much more. It comes equipped with a vast music library, and if you’re looking for new sounds (or even new callouts) you can aim directly to Camtasia website, where they are regularly released. We have to point out, anyway, that you can’t apply any proper color correction to your video.

And speaking of your videos: you can share them in a wide variety of formats, starting from industry standard such as .mov. Given that Camtasia has been released in 2012, Flash video support is deeply ingrained in the suite. Moreover, with just one click you can export the final video on your YouTube account, or upload it on Facebook. TechSmith gives you some web storage for your videos, and you can buy some more.

Unfortunately, Camtasia Studio 8 Mac edition has less features than the Windows counterpart (just to name one, the interactive options), but TechSmith sell it for a considerable less price, acknowledging its shortages. It also has a very loud community.

Camtasia website has a lot of video tutorial (as one can imagine), which explore every basic feature and most of the advanced ones; on the other hand, knowledge base covers every topic you can think of, speaking of the software and its features.

Maybe Camtasia Studio 8 is a bit pricey, although its price matches other professional suites. Upgrade from previous version is half the price of a brand-new license. At the moment this review is published, Camtasia Studio 8 for Mac costs a third of its Windows counterpart, to highlight that TechSmith doesn’t want that Mac users pay for its shortage.

Hosting price is too high for what it offers, given that there are plenty of options to upload your videos with no expenses (just to name a few: YouTube or Vimeo) – but it’s an extra service and you don’t have to buy it to use Camtasia at its fullest.

Camtasia Studio 8 can be effectively used for any ameteur video purpose, and it’s apt even for many professional needs. Lacking color correction, you have to figure out a way to manage footage from different location or lighting, or edit a proper feature film. If you have to make a short industrial or a private video, it’s the perfect solution.

Best for: every consumer needs, and some professional ones.