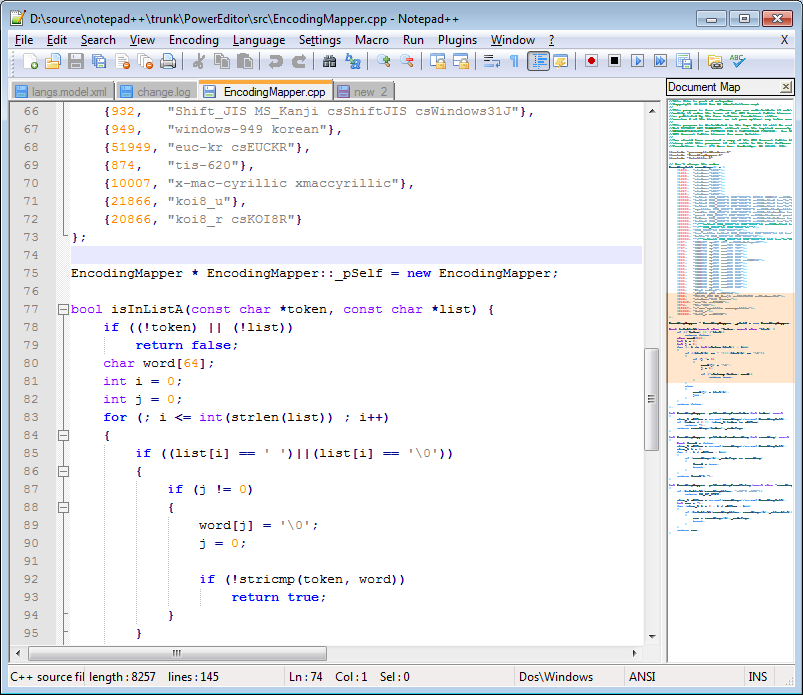 The main sales point that Notepad++ uses to promote itself isn’t a feature trumpeted by many software programs. By optimizing as many routines as possible, the creators say, Notepad++ is trying to reduce the world carbon dioxide emissions. Because the program uses less CPU power, computers can reduce their electricity consumption and create a greener environment. Notepad++ is environmentally friendly. That may be true but unless the program offers the text editing features that users want, no one is going to use it and that carbon dioxide is going to be emitted by a different piece of software anyway.

To a large extent, Notepad++, which only runs on Windows, succeeds. Created in 2003, it’s had plenty of time to mature and develop, and it remains popular with developers who have been using it for years. User reviews consistently give it five stars and developers gush about how long it’s been their text editor of choice, with no disadvantages that they can think of. It certainly has a loyal following.

Notepad++ looks as simple as the basic Notepad program that comes with Windows, but has a number of additional features that make it useful for developers. The most outstanding is the ability to create tabs that allow developers to keep multiple files open at the same time. The default menu bar comes packed with features that include editing options, function lists, document maps, and the ability to use folders as a workspace. The program supports a huge range of languages, from ActionScript to YAML. Plugins extend the program’s functionality to include converters and MIME tools. The macro-recording feature that appears in the menu bar might not be as useful as it looks but the auto-completion, both for words and functions, will help to speed up the typing and coding. Users can also define their own syntax highlighting and folding.

But while being an extended version of Windows basic Notepad text editor might have looked sufficient a decade ago, today’s developers can choose from a much broader range of text editors that include much more exciting features. Notepad++ doesn’t have packages, for example, now a standard and much-loved feature of other text editors. Customization is fairly basic and some users have complained that it can be slow.

Nonetheless for developers looking for a basic, user-friendly and free environment in which to write HTML, CSS, Ruby and a host of other languages, Notepad++ is a good option.

Notepad++ is like an extended version of Notepad that was expanded with developers in mind. It’s basic and simple but still does almost everything you’ll need.

ACCU-RATE:
Review this softwareGet it now!

Notepad++ is free. It runs in the MS Windows environment with its use governed by a GPL license.