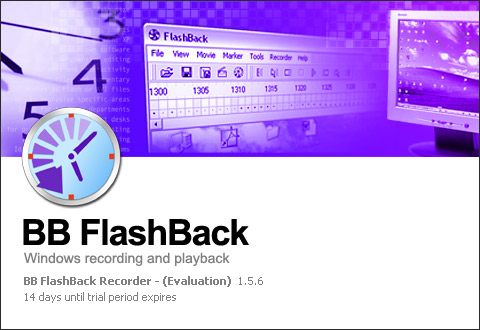 BB FlashBack could be the right fit if you’re looking for a video editing software capable of a quick screencast, but we found it lacking a lot of features that a full fledged must have. Read along to find out more.

If you have ever used a video editing software you’d find BB FlashBack interface pretty standard: on the left panel, effects, titles and more; on the right panel there’s the playback video; on the bottom there’s the timeline of your video. That’s a pretty improvement from previous versions, because BB used to have the timeline panel on the top of the window (and it was pretty useless).
Flashback displays every feature you’ll need in front of you, trying to minimize the time you need to flick around to find the correct tool, and works pretty well. As Camtasia Studio Pro, BB FlashBack is actually two different products, one for screen recordings (with different options to tailor the recordings to your needs) and the editing suite.
If you consider the product’s website as part of the user experience, we have to say that Blueberry Software has to get their site up to speed with the modern web. Their site’s look and feel is remarkably out of date.

As far as ease of use, BB FlashBack competes with Camtasia for your choice as screen recording software. You can select the entire screen or just the section you’re interested in, or a particular software windows, or a specific area you drawed. There are some tools that help you magnify some areas of the recording or smooth your mouse motion (if you used it frantically it could save your screencast).
As for the editing software, BB FlashBack has a precise frame-by-frame editor which we really liked: you can edit down to the single frame, and it’s a powerful features. Apart from that though, BB FlashBack lags behind other software (like Camtasia, just to name one) for everything other editing tool. For example: you have just one track to place video or audio clips on, with no chance to put one clip on top of the other, which is baffling to say the least. As for transitions, it has only a few types, compared to other software plentiful choices.
Anyway BB FlashBack offers other features which could be useful, such as password protection for your video, interactive texts, an option to localize the text of your videos with ease and more.

BB Software support site is made by a FAQ section (pretty thorough) and video tutorial to explain their users how to use BB FlashBack. Pretty much the usual suspects here, but everything’s shown in a clean way that we really appreciated. The video tutorials are made to show you how to use the software but also all its features (there’s an abundance of interactive texts), which is clever although a little overdone.

BB FlashBack comes in three editions: Express, Standard and Pro. There’s nothing more than screen recordings in the Express edition, but if you need to share quickly a screencast it’s enough (you can upload directly on YouTube, or export in AVI or Flash format). The Standard edition add some beef, especially exporting and annotation options, but if you need a video editing software you have to get the Pro edition. It still costs a lot less than Camtasia, so if you’re on a budget BB FlashBack could be the right choice.
Take a good look at the features you’re looking for in the comparative table between these three versions to find out which one does what you need.

With BB FlashBack editing a video isn’t a smooth experience as with other screen recording and video editing software, but if you just need a quick screencast could very well be your choice.

Many export options, and a little more control over your editing.

Export your screencast and upload them on Youtube and similar.