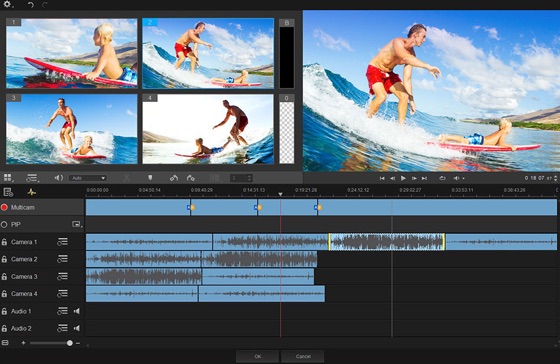 There’s gold in those hills… and it’s yours if you can be bothered to get up and hike out there. Because while Pinnacle Studio 20 glitters and delivers real value, Adobe’s Premiere and Corel’s VideoStudio both also gleam. They’re excellent video editors that deliver very similar services and are much closer at hand. The question is whether budding filmmakers should make the effort to walk away from the familiar and the famous towards a path less taken.

At first glance, they have little reason to. Pinnacle Studio offers many of the same features that any filmmaker would expect from a video editing tool: multi-camera editing, stop-motion animation, montage templates for easy storyboarding, a large asset library and a huge selection of transitions. The software comes with a 21-day pass to training material and a stock library. All the basic tools that an editor will find themselves turning to again and again are right there — as they are in Adobe’s Premiere and Corel’s VideoStudio.

Look a little closer though, and the differences become clearer. The layout, for example, is a little unusual. While video editors tend to allow users to switch between timeline and storyboard modes, Pinnacle Studio offers both on the same screen. It’s surprisingly useful and soon becomes a comfortable way to work.

More importantly, though, Pinnacle Studio Ultimate is one of three of versions of the same piece of software offered by the company. Each of those versions — Studio, Studio Plus, and Studio Ultimate — packs in basic editing tools but Studio Ultimate goes further. You’ll get more than 2,000 transitions and effects in comparison to Studio’s 1,500; six-camera editing instead of Studio’s two cameras; a mosaic blur for motion tracking, which isn’t available at all in the budget version; and live screen capture, which the cheapest version also lacks.

Only Studio Ultimate provides 360 degree video editing, bonus effects, and unlimited video/audio tracks. (Studio offers just six tracks, and Studio Plus provides 24). The result is that if you head towards Pinnacle, you won’t just get a perfectly capable video editor, you’ll also get a choice of the features you want in line with the amount that you’re willing to pay.

That might sound like a small benefit but the challenge for makers of video editing software is that users are often required to pay for features they’ll never touch. Pinnacle’s ability to deliver better value for money makes that walk into the video software hills a trip worth making. Other software companies make a similar offer but Pinnacle’s is particularly straightforward and allows buyers to have a clear understanding of what exactly they’re buying.

Pinnacle Studio has a slightly different workflow in comparison to other video editors but it’s big benefit is the ability to pick a version that matches your need and your budget.

Best for: Non-professionals who want video editing software that can grow with their skills.