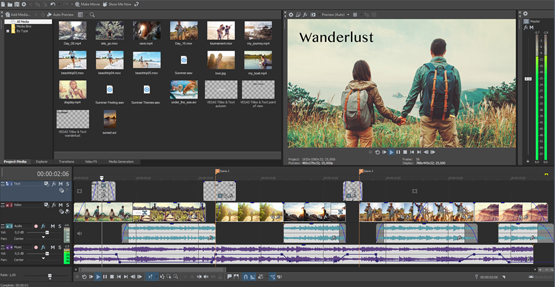 If you’ve seen one video editor, you’ve seen them all. That isn’t true though of the Vegas suite of video editors. You won’t have seen a user interface quite as ugly as Vegas’s. While other editors go out of their way to make what appears on the screen look exciting and fun so that the editing experience is as enjoyable a part of movie-making as holding the camera and shouting “cut,” Vegas seems to have gone out of its way to make you take the footage-cutting business seriously. Elements on the page are frustratingly small. Graphs look Very Important but make all but the fiddliest of editors wonder what they’re seeing. The grey background sucks out any idea that doing creative stuff with moving pictures is something to be celebrated rather than endured.

That’s surprising because the Vegas suite of software tools was originally developed by Sony as part of its Creative Software portfolio, and Sony are better known for making tools that are sleek, sexy and as aesthetic as they are functional.

The functionality at least remains. Head to the top end version and you’ll find that the Vegas Pro Suite has a host of tools that are likely to satisfy professional editors and confuse hobbyists. Multicamera editing can handle as many as 32 different camera sources. “L*a*b* color space” gives detailed control over color. The “L*a*b* Histogram view” shows channel distributions of images. Editors can also use NEWBLUEFX looks, Boris FX BCC Match Move Unit, and proDAD Mercalli V4 image stabilization. That all sounds very impressive and the image stabilization will make drone footage noticeable smoother. But strip away the fancy language and what you end up with is many of the same features that you can find on other video editors.

In effect then, video editors considering buying Vegas’s software have to compare not just the suite as a whole but they also have to decide which particular version they might want to buy and at what price. It’s a tough ask, especially when they’ll also have to compare the value of a set price to Adobe’s subscription pricing.
And in the end, it’s not likely to matter a great deal because despite the slate-grey of the professional tools, all of the versions are as functional, comprehensive and well-made as their competitors.

With six different versions and an unattractive UI to choose from, Vegas might look easy to dismiss. But once you’ve narrowed down the choice, you’ll find that you’re using a video editor at least as good as anything else out there.